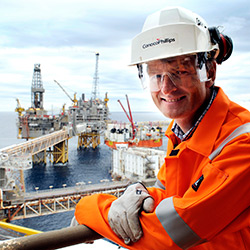 First Field on the Norwegian Shelf

The Ekofisk field was discovered late in 1969, and production started on June 9, 1971. The area has been developed through several stages. The Ekofisk field with central processing facilities was developed in the early 1970’s. The first few years the oil was loaded from buoys on the field. From 1975 the oil and NGL (natural gas liquids) has been transported through a pipeline to Teesside in the UK, whereas the gas has been brought ashore through a pipeline to Emden in Germany from 1977.

The water depth in the Greater Ekofisk Area is 70-80 meters. Due to a drop in pressure the seabed has been subsiding over the years. Efforts to protect the platforms against the effects of the subsidence started as early as in 1985. All steel platforms at the Ekofisk Complex were jacked up six meters in 1987, and in 1989 a protective barrier wall was installed around the Ekofisk Tank. The subsidence of the seabed has decreased in recent years.

As part of the desire to continually increase the production rate in the Greater Ekofisk Area, the water injection platform Ekofisk 2/4 K was put on stream in December 1987. The water injection capacity in the field has later been increased several times, and the latest addition was the 2/7 E platform on the Eldfisk field. The total injection volume in the Greater Ekofisk Area is above 500,000 barrels of water per day.

The Ekofisk Growth Project was developed to increase the production, the processing capacity and regularity from the Greater Ekofisk Area. The Ekofisk 2/4 M platform, which came on stream in 2005, was part of this project.

The Ekofisk South project contributes to a substantial increase in the oil production in the coming years. The development consists of the 2/4 Z wellhead platform with 35 production wells and one well for water injection, and the seabed   installation 2/4 VB with eight wells for injection of water.
Ekofisk 2/4 Z and 2/4 VB started operation in 2013. In 2017 the Ekofisk 2/4 VC seabed template with four slots for water injection was approved. Water injection started in the fall of 2018.

In 2001/2002, the Norwegian authorities approved the Cessation Plan for Ekofisk I. The concrete substructure of the Ekofisk Tank is left in place, while the other shut down facilities are removed. So far, nine steel platforms have been brought to shore for recycling.