The Oil and Gas Terminals

Oil and gas from the fields in the Greater Ekofisk Area are transported by pipelines to terminals in Teesside and Emden, respectively.

A 443-kilometer pipeline brings the gas to Emden in Germany, and a 354-kilometer oil pipeline transports oil and NGL to Teesside on the UK East coast.

ConocoPhillips operates the Teesside terminal. Oil was first received in 1975, and the main processing plant was completed in 1979. The facility was originally designed as a  one million barrels/day crude oil reception, processing, storage and trans-shipment installation. The terminal also fractionates natural gas liquids into ethane, propane and butane. Operations comprise both processing and tanker-loading facilities covering a 285-acre site at Seal Sands, at the mouth of the river Tees. 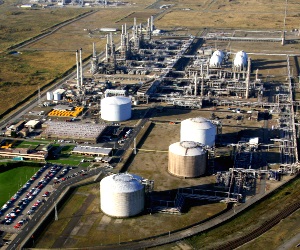 Crude oil and natural gas liquids from ConocoPhillips' Greater Ekofisk Area fields are delivered to Teesside as well as third party volumes from other fields in the Norwegian and British parts of the North Sea.

The plant includes a stabilization section, an NGL section, utilities section, crude oil and NGL storage tanks and a port of shipment. The oil and NGL from the Norpipe pipeline is fractionated, to reduce the vapor pressure of the crude oil, in the stabilization process. The stabilized crude oil is stored, ready for shipment, at the tank farm which comprises nine storage tanks each of 750,000 barrel capacity. The NGL is separated into methane, ethane, propane and butane, with capacity to also separate normal-butane, and iso-butane in the NGL section. Methane is used as fuel for the plant.Ethane and butane are cooled to liquid state and stored refrigerated in large insulated tanks prior to shipment. Propane is currently directly loaded to ship. From 2019 pipeline export of propane will be available and in 2020 new pressurised storage for ship loading will be available.

The suitability for deep-water quay facilities was one of the reasons why Teesside was chosen as the terminal site for Ekofisk production. The terminal has four quays for crude oil (three currently in service), one of which can also load NGL products, and three dedicated quays for NGL products. The crude oil quays can receive tankers of up to 150,000 tonnes d.w. and two of the NGL quays can receive ships up to 60,000 cubic-meters capacity for some products..

Prior to the change of the gas distribution system on January 1, 2003, Norpipe a.s was the owner of the gas pipeline from Ekofisk to Emden Germany, and Norsea Gas A/S was the owner of the terminal in Emden. ConocoPhillips was then the operator of the gas pipeline as well as the Emden terminal. Following the change, the operatorship of both of these units was transferred to the state-owned Gassco. A new terminal was opened in May 2016.