It is 45 years since oil production started at Ekofisk - and Norway thus became an oil-producing nation. Since the beginning in 1971, values ​​of more than 2,100 billion Norwegian kroner have been created in the Greater Ekofisk Area. 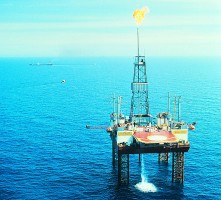 The giant Ekofisk field was discovered in the fall of 1969. After the discovery, the field was soon developed. In September 1970 the Phillips Group applied for consent for test production, and in January 1971 the declaration that the field was commercial was submitted to the Norwegian authorities. 18 months after the discovery production started, in the summer of 1971.

Continuous development
The Greater Ekofisk Area has been developed in many phases. Since the 1970s there has been an extensive and continuous technology development, industrial development and value creation. The Ekofisk Complex also plays an important role as a hub for the processing and transportation of oil and natural gas liquids for many other producing fields in the area. Ekofisk has also contributed to the development of the Norwegian supplier industry.

There are many great events to look back on during 45 years. The jacking of the Ekofisk Complex in 1987 was a great achievement. Water injection started the same year. It has contributed to increased recovery from the chalk reservoir. The Ekofisk II development in the 1990s was also important to extend the life-time.

New infrastructure
In recent years, huge investments have been made in the new infrastructure at Ekofisk and Eldfisk. This, along with an extensive drilling program with many new wells, contribute to maintaining the production in the Greater Ekofisk Area for years to come.